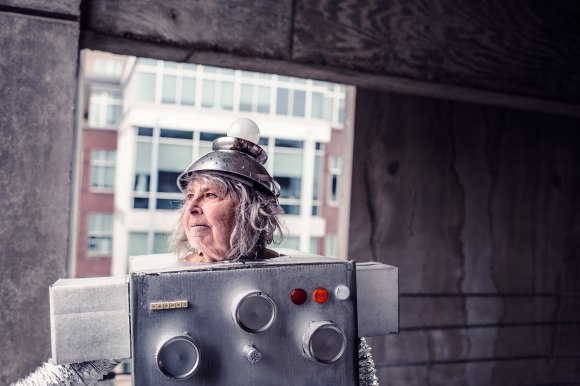 First of all, she began to act out of character. She would come home from work and ask for a glass of water with lots of ice in it. You may not see anything wrong with that, on the face of it, but it was plenty odd because my mother never drank glasses of water with lots of ice in them. And now she wanted a glass every night. To make things even more stressful for us, each glass was closely examined and if it was not perfect – not enough ice, water somehow looked cloudy, the glass was not perfectly polished – one of us kids would have to get a new glass and make sure that it was perfect this time.

Then there was the language. My mom started using new slang. For all I know now, she may have started hanging out with a new lunch buddy and picked up some phrases from this new friend. But, along with the water, this new language mom was freaking me out. It was truly odd. But the breaking point came, for me, one Saturday morning. I was following my mother around the house and she watered and spoke to her many, many plants. This was totally in character so that gave me some comfort and was likely the reason why I was hanging about with her that morning. Then I noticed that her dress didn’t quite fit. It was tight on my mom and that was, once again, out of character for her. What was going on?

That thought was still with me as I spent time alone that afternoon. What was going on? Well, after an afternoon of pondering, I had narrowed it down to two options. Either my mother was having an affair or she had been abducted by aliens and they had left an imposter alien in her place. My two options seemed to be the only options that made sense to me at the time – I had friends at school whose parents were going through divorce. Something about our conversations made me think that divorcing parents did not act like themselves. But, if it wasn’t divorce, it could only be aliens. I blame Star Trek for getting me to believe that my mother could be abducted and a poor replica, that wasn’t quite the same size and betrayed itself with its weird speech patterns and love of ice, be left in her place. Both options were devastating for me; either way I was losing my mother and that filled me with despair. I even cried a little that afternoon.

Fortunately for my state of mind, just that week, as though she knew what was going on with me, my mother broke the news. She was pregnant (some may say I was sort of right about the alien in her body). What a relief!

It turns out that, despite all the clues that I noticed, I came to a completely wrong conclusion about what was causing the changes in my mother. Fortunately all my wrong conclusions led to was an afternoon of sadness and tears. In the work place, the consequences of taking data, red flags and other clues to incorrect conclusions can be far more costly. A classic example is that of Rita Crundwell, who defrauded the city of Dixon of over $53 million. The people who worked with her saw that she had a growing stable of quarter horses and was often traveling far and wide with these horses. They assumed that the horses paid for themselves and more and this was how she could afford to keep them. People in the horse world, who knew that horses cost more than they made, thought that she had some kind of trust fund that paid for her extravagant lifestyle. When Rita would not let anyone do her work, or even collect her mail, they thought she was being a great treasurer who diligently controlled her city’s budget. No one saw all the clues and thought she was embezzling money.

If someone was paying attention to the clues and knew how to analyze all the red flags that Rita Crundwell left in her wake, her fraud would never have lasted for the two decades that it did. If, for instance, the city had taken on the services of a forensic CPA to analyze, design and implement control systems and to help them with fraud prevention and deterrence, they may not have lost over $53 million to Crundwell.

This is an excellent reminder of how important it is to have a CPA, with experience and qualifications in financial forensics, to analyze and assess your business’s operations and finances to see what clues are there and what those clues really mean. You may notice that things are amiss, but how willing are you to accept how expensive coming to the wrong conclusion can be for you?